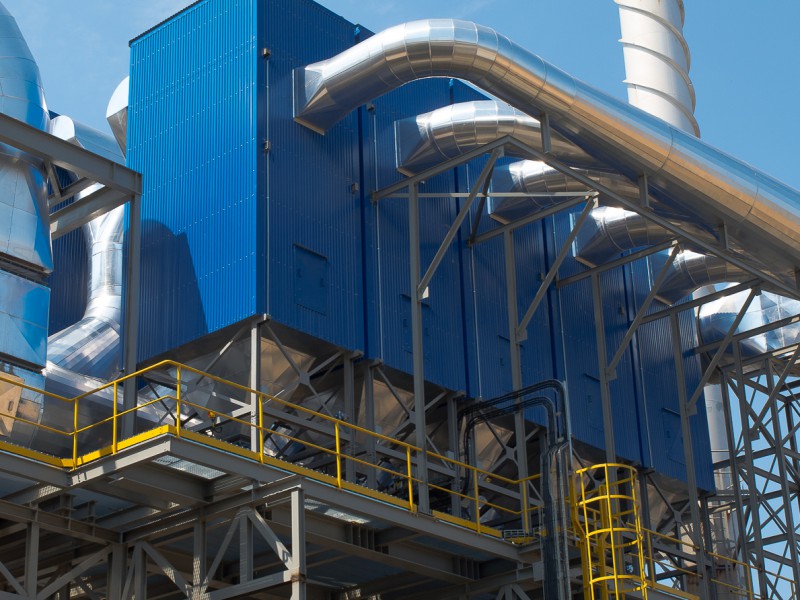 Biomass Magazine - The Utility of Cyclones

"Cyclones have been around for more than 100 years, with the first patent issued in 1886. "They have been used ever since to separate particles from an air, gas or liquid stream without the use of barrier filters across a wide range of industries," says Pedro Araujo, CEO and cofounder of Advanced Cyclone Systems S.A. The Portugal-based company is exclusively dedicated to the development and commercialization of high-efficiency cyclone systems worldwide. "Cyclones do not function differently depending on the applications," Araujo says. "The fundamental principles remain the same."
Andy Cowan, vice president of Rees-Memphis Inc., says while the technology is old, cyclones have been relied upon for a long time because they are good at what they do. "They're a separator to redirect and make air do what you want it to do," Cowan says. "Dust will drop out, and you have clean air coming out."


The primary function of cyclones is to separate dust particles from an air or gas stream. Mike Clark, regional sales manager for CECO Environmental, says two primary factors influence cyclone performance: centrifugal force and residence time. "The typical industrial cyclone is a centrifugal reverse-flow cyclone," Clark says. "Dirty gas with particulates enters the top and it spins around the body of the cyclone, down the cone, and the particles are forced alongside the wall of the cyclone and are collected." Araujo says in air-solid cyclone separation processes, the gas and particles enter tangentially through the top, and high-speed rotation flow "throws" the solid particles against the wall?"a consequence of the higher inertia of the solid particles relative to the gas particles," he says. "As the air stream approaches the bottom of the cyclone after going down, it inverts the direction in the Y axis, though maintaining the same rotation, and escapes the cyclone by a vertical outlet, or vortex finder, on the top." It is this inversion of movement that gives the name "reverse flow" to these kinds of cyclones. Cowan says air follows the path of least resistance, so once this inversion of movement happens at the bottom of the cyclone, the cleaned air escapes through the larger opening at the top?the least-resistant route.
Positioned at the bottom of a cyclone is either an expansion chamber, dust receiver or vortex breaker, which allow the particles to disengage from the spinning gas stream and exit through an airlock or feeder while the cleaned air turns up the center of the cyclone and out the top. The outlet air exits either to the atmosphere or other downstream equipment such as a baghouse, scrubber, or wet or dry electrostatic precipitator (ESP), depending on the application, emissions standards and more.
"What affects operational efficiency as the gas stream is spinning is centrifugal force?a measure of the force applied when spinning?so the faster the inlet air speed, and the smaller the cyclone body diameter, the more force there is pushing particles to the wall for collection," Clark says. "How long that force is allowed to act on the particles determines how much of the particles will be collected, especially the fine particles." The larger the particle size, the more efficient the cyclone. "There is a fractional efficiency curve associated with the efficiency of a cyclone," Clark says. "If you have a dust distribution stream that is course, you can use a lower-efficiency cyclone to achieve a given collection efficiency. If it's a very fine dust, like flour or talcum powder, then it takes a much more efficient cyclone to achieve the same efficiency by weight."
Motorized fans, positioned either on the clean or dirty side of the cyclone, provide the energy to power the vortex effect. A positive cyclone system is one in which a material-handling fan blows into the cyclone, Cowan explains, whereas a negative cyclone system operates with a fan on the clean side, sucking clean air out versus pushing particle-laden air in. Cowan says the negative system is more efficient. "If you put a fan on the positive side blowing into cyclone, you don't need a rotor airlock at the bottom of the cyclone," he says. In the wood industry, one reason not to have the fans on the positive side is, if the fan does not have the abrasive particles constantly flowing through it, there is less wear to consider. "But they tend to work better on the positive side," says Cowan, adding that if a filter follows the cyclone, then the fan setup is typically positioned for negative pressure.
Fans can be considered part of the cyclone system, Cowan says, but in large mills where there is a lot of waste, the fan systems are separate units. "In those, we put them on the ground where we can maintain them," he says. "The biggest one I've ever seen where it's part of the cyclone is about 50 horsepower, set up as a negative pressure system pulling cleaned air through."

Customer Needs, R&D, Simulations
Some manufacturers design custom-made cyclones for specific applications, but the cost is much greater. "We can't sit down and design a cyclone for every single customer and application," Cowan says. "Some will do that. The customer will say we need this and that, and they are willing to pay $70,000 on just one cyclone. This starts with a particle size distribution analysis." Computer programs can then take that data, density and velocity of air, to design a cyclone for a specific application. "It's very costly to do, plus these customers want performance guarantees," Cowan says. "There are a few companies that will provide guarantees, but you're paying a lot of money for that. The parameters have to stay constant all the time."
Clark says it's difficult to perfect an equation to predict the performance of cyclones. He says when Fisher-Klosterman launched its XQ series in the early 1980s, the company conducted empirical lab testing to determine the fractional efficiency curve of cyclones, and how it relates to gas density and viscosity. "If a customer comes to us, we take a sample of their dust and convert it to aerodynamic distribution and overlay that data on curves we developed empirically," he says. "Then, we guarantee removal percentage by weight. We've been doing this for 40 years?and guaranteeing performance."

ACS uses specialized modeling and numerical optimization to manufacture an optimized family of cyclones. "ACS's cyclones are better due to our specialized scientific knowledge in particle agglomeration modeling?PACyc?and numerical optimization in partnership with the engineering faculty of Porto, where we run a pilot system for R&D," Araujo says. "The revolutionary concept of particle agglomeration is essential to explain how cyclones really work and, consequently, to optimize them. The outcome of our research is not a universal solution, but a set of very different cyclone families and systems serving particular client needs and customizable for each given application."
Using PACyc modeling while considering several economic and operational constraints such as size and pressure loss, Araujo says it is possible to affordably simulate millions of virtual prototypes with numerical optimization. "Considering this approach as the best path to obtain truly optimized cyclones, sound theories of cyclone collection and pressure loss were chosen for each process application," he says. "These numerical optimization problems have resulted in several families of cyclones, some of those patented. Indeed, different industrial cases have different needs for which the optimization functions to incorporate in the PACyc model may be as complex as minimizing cost or space, subject to a minimum efficiency result. Our cyclone families, always subject to further customization, are the result of very different client demands ACS has come across to date. Unlike most cyclone providers, we give strict guarantees of emissions and efficiency."

ACS has installed systems for various biomass applications, such as combustion boilers, pyrolysis, gasification, pelleting and drying. The company completed nearly 200 projects in the past seven years, which helped ACS "develop a complete line of very different hurricane cyclone families for each different need, considering how interparticle agglomeration/clustering affects collection efficiency," Araujo says. "From coarse particle preseparation proportioned by compact and low pressure drop cyclones, such as our SD and DX lines, to fine particulate capture with high-end geometries such as the EX and MK, ACS provides solutions for a wide range of industrial cases, being able to reach emissions comparable to ESPs."
Although Rees-Memphis doesn't custom-make cyclones or provide performance guarantees, the company relies on basic designs that, over time, have proven to work in certain applications. Through experience and adjustment techniques, such as baffling at the bottom of the cyclone to help direct air out, Rees-Memphis helps guide the customer, who knows up front there is no performance guarantee.

Life and Maintenance
With no moving parts, maintenance on cyclones is fairly low. "It's mostly spot-checking, making sure there's no holes or wear anywhere," Cowan says. "We might replace an elbow in the dust collector once every four months. We do build cyclones with stainless steel abrasion liners at the inlet that can be removed if need be."
Abrasion is often the main concern. "The more material coming through it, the more abrasion you have," Clark says. This can be mitigated by material selection with abrasion-resistant materials in key areas, or building in replaceable sections where known wear will occur. He says if the velocity, centrifugal force and pressure drop are too great, this will cause premature wear. "There is a practical limit," he says.
In most biomass applications where abrasion is not a factor, the maintenance requirements are usually limited to visual inspections every six to 12 months to ensure there is no plugging, condensation or unexpected material accumulation, Araujo says. "There is only maintenance of the rotary valves, as any other valves following the respective manufacturers' recommendations," he says.
Painting the cyclones is another routine maintenance practice to increase the longevity of the system, Cowan says. In addition, inspection of the fan systems, including looking for loose belts, feeling for unusual vibrations, which may mean something is hung up on the wheel; and making sure the motor has proper lubrication, if required; and the bearings are greased and not running hot, are all part of sound routine maintenance practices.
With proper maintenance and rework as needed, cyclones can last decades. "Some of ours have been out there in the field for more than 20 years," Clark says.
ACS designs its systems to last at least 10 years. "Our main concern is abrasion, which may happen for many types of biomass combustion, for instance, due to the silica content of the ash and course particle size," Araujo says. "For this reason, we usually place our systems after any basic preseparator, for example, a low-efficiency, low pressure drop multiclone, which can easily capture the big and more aggressive particles, leaving the fine particulate to be handled by one of our most efficient product lines."

Latest collaboration with Biomass Magazine. You can read the full article in the link below.
http://biomassmagazine.com/articles/15380/the-utility-of-cyclones 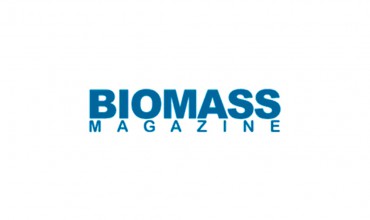 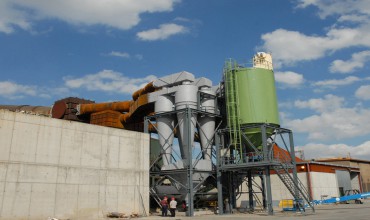 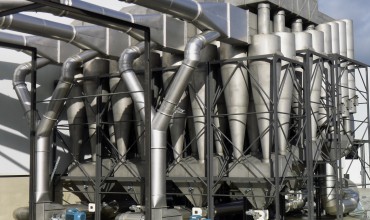